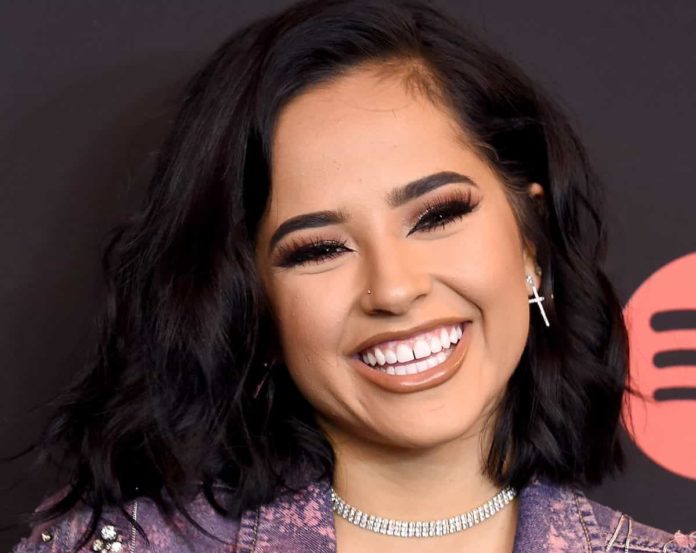 The internet has given a chance to Numerous young celebrities to showcase their talent to the Global audience and one of them is the American singer, rapper, and songwriter Becky G, whose birth name is Rebecca Marie Gomez.

As she used YouTube effectively to put up videos that brought her recognition and showcased her talents, it won’t be wrong to call Becky G an “Internet’s child”.

Becky likes to experiment and show off her abilities as a rapper and no matter what the genre, she believes that music completes her. Being patient with yourself and being patient with the people around you is how she tries to achieve success.

Born on 02nd March 1997, Becky G is currently 25 years old. She does not appear to be much taller but has a slim and well-maintained body figure. Her body figure measurements are 34-26-35. Becky’s height measures 5’1” and her weight is 48 kg approximately. Becky has Dark Brown eyes as well as long and straight Black colored hair.

As Becky G has been active as a singer for a long time now, she has also managed to gather a loyal fan base. She is an internet sensation and earns most of her wealth from her career as a professional musician. The total net worth estimated for Rebbeca Marie Gomez is $3 million dollars as of now.

Rebbeca Marie Gomez was born and raised in Inglewood, California and she is the eldest daughter of Francisco “Frank” Gomez, her father and Alejandra Gomez, her mother. She grew up along with her three siblings, her two brothers Frankie Gomez, Alex Gomez, and a sister whose name is Stephanie Gomez.

Becky and her family had to shift to her grandparents’ home in Los Angeles in 2007 and lived in a converted garage after they lost their home due to a financial crisis. To support her family, Becky began working around this time. She attended public school but after being bullied at school, she switched to homeschooling.

In 2013 with her debut single ‘Becky from the Block’ and the song ‘Play it Again’ Becky G became famous. ‘Play It Again’, her debut EP featured five songs, and the track with the same name, on the first day of its release made it to iTunes’ top 100.

Released in 2014 by Kemosabe Records and RCA Records, The song ‘Shower’ was Becky’s first song to enter the top 20’s in Billboard Hot 100 chart in the United States. Becky featured in ‘Oath’, which is the British pop star Cher Lloyd’s song.

She also appeared in American recording artist Cody Simpson’s 2012 hit track ‘Wish U Were Here’ and Kesha’s 2012 remix of ‘Die Young’. From the age of 12, Becky G began showing interest in rap music and became known in 2011 after she uploaded her singing and dancing videos on YouTube.

Founded by Dr. Luke, the Sony Music Entertainment imprint Kemosabe/RCA has signed a deal with Becky G and she is predicted to have a successful and thriving future ahead.

Here we provide you the list of Becky G’s favorite things. Some Interesting Facts About Becky G