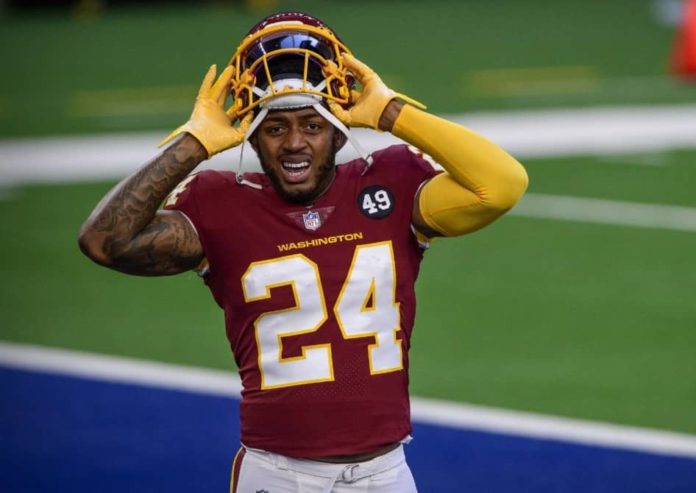 To be a successful multitalented person in the modern-day, you ought to channelize your talents, this line has been very well proved by Antonio Gibson is indeed an American footballer who plays running back for the National Football League’s Washington Redskins (NFL).

He entered the 2020 NFL Draft as a running back and was taken in the third round by the Washington Redskins. In July 2020, he signed a four-year contract with the team. Prior to moving to the University of Memphis in 2018, he played two years of collegiate football at East Central Community College in Mississippi.

In 2019, he was named the American Athletic Conference’s (AAC) special teams player of the year, and he was recognized for his work as a return specialist and wide receiver for Memphis.

He maintains himself very fit and healthy with a weight of 100 in kilograms and 220 lbs in pounds. Moreover, he is very conscious about his physique and follows a regular and healthy diet in order to keep himself fit as a fiddle.

Antonio Gibson is a great footballer with a net worth estimated to be between $1 million and $5 million as of 2021. His current team pays him something between $600,000 and $1 million per year. His football profession is his major source of income.

Antonio was born and raised up in AmericaStockbridge, Georgia, USA and belongs to the African-American ethnicity. He is born to his mother Annette Williams while his father’s name is not known. He has been grown up with his brother Danielle Moore.

As of his education, Gibson went to Eagle’s Landing High School in McDonough, Georgia, where he was a member of the football, basketball, and track teams. He began his college career at East Central Community College, where he played football until transferring to the University of Memphis in 2018.

As of his career, Antonio Gibson is a running back prospect in the 2020 NFL Draft. The Washington Redskins chose him in the third round with the 66th overall pick. On July 22, 2020, he signed his four-year rookie deal. In Week 2, against the Arizona Cardinals, he scored his first professional touchdown on an 11-yard rush.

In week 4, against the Baltimore Ravens, he had 128 total yards from scrimmage and a running score. Then, in Week 7, against the Dallas Cowboys, he had his first career 100-yard running game, carrying 20 times for 128 yards and a score. In a 30-27 loss against the Detroit Lions in week 10, he carried for 45 yards and two touchdowns.

For his efforts, he was named the Pepsi NFL Rookie of the Week. On the opening carry of the game, he suffered a turf injury and did not return the following week against the Pittsburgh Steelers. As a result, he was forced to sit out the rest of the game. He was the first Washington rookie to earn 1,000 yards from scrimmage since Alfred Morris in 2012.

He concluded the 2020 season with 11 running touchdowns, which led all rookies. In Week 3 of the 2021 season, he had a 73-yard touchdown reception against the Buffalo Bills. He rushed for 63 yards and a score against the Atlanta Falcons, giving him over 1,000 career rushing yards, marking him the third Washington player in team history to accomplish so in his first two seasons, joining running back Alfred Morris and quarterback Robert Griffin III.

On Monday Night Football against the Seattle Seahawks, he rushed for 111 yards on 29 carries, marking his first 100-yard running game of the season.

Antonio Gibson’s relationship status is single, and he has yet to tie the knot. When it comes to his personal life, he maintains his privacy. He is not currently dating anyone and is believed to be single at this time. He is enjoying a happy single life with no distractions.

Here we are providing the list of favorites of Antonio Gibson: Some Interesting Facts About Antonio Gibson