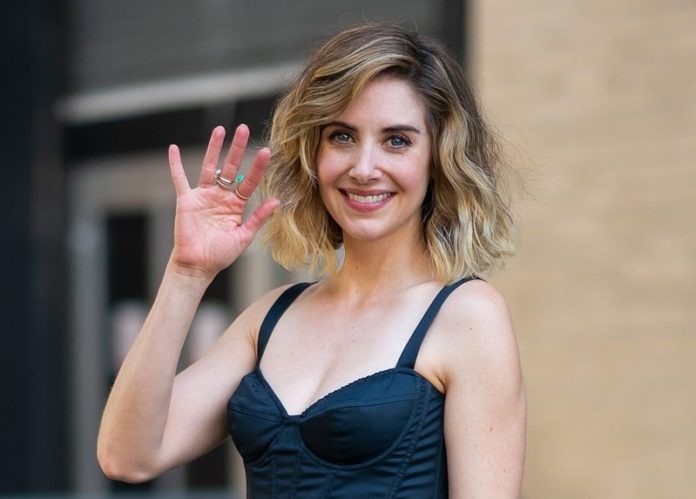 The backbone of success is hard work, good planning, determination, and perseverance, this line has been very well proved by Alison Brie Schermerhorn, better known as Alison Brie, who is an actor, writer, and producer from the United States.

She is most known for her roles as Trudy Campbell on “Mad Men” and Annie Edison on “Community.” She debuted as Ruth Wilder in the Netflix series “GLOW” in 2017. She also worked as a clown at birthday parties for a short time.

Alison played Alice in the short film “Stolen Poem” in 2004, and she also starred as a guest star in the Disney Channel musical comedy series “Hannah Montana” in 2006. Furthermore, she was revealed as a celebrity guest in the fifth season of the animated comedy “Rick and Morty” in June 2021.

Being an actress, she is very conscious about her physique and figure and takes care of her weight which is 50 kilograms and 110 lbs in pounds. She has a beautiful doll-like face which is complemented by her blue eyes and dark brown hair.

As of 2021, she has a net worth of $10 million and earns roughly $1.73 million each year. Brie’s main source of income is her acting, writing, and producing profession, and she is dedicated to her job.

Brie was born and raised up in Hollywood, California, U.S., and belongs to mixed ethnicity. She is born to her father Charles Terry Schermerhorn and her mother Joanne Brenner. She also has a sister named Lauren.

As for her education, Brie received her high school diploma from South Pasadena High School in 2001. She earned a bachelor’s degree in drama from the California Institute of the Arts in 2005. She also attended Glasgow’s Royal Scottish Academy of Music and Drama.

As of her career, Alison Brie began her acting career in 2006 as Nina on the Disney Channel sitcom “Hannah Montana,” then went on to feature as Trudy Campbell in the AMC historical drama series “Mad Men” in 2007. (2007-2015).

She’s also appeared in a number of films and television shows, including “Montana Amazon,” “Scream 4” (2011), “The Five-Year Engagement” (2012), “Lip Sync Battle,” “Sleeping with Other People,” “The Little Hours,” “The Disaster Artist,” and others.

She also portrayed Princess Unikitty in the animated comedy film “The Lego Movie” (2014), as well as a character in an episode of “American Dad!” Later, in 2017, she began her starring role as Ruth Wilder in the Netflix comedy-drama series “GLOW,” as well as reprising her voice role as Princess Unikitty in the animated comedy sequel film “The Lego Movie 2: The Second Part,” and providing an English dub for the Japanese animated romantic fantasy film “Weathering with You.”

In June 2021, it was revealed that she will appear as a celebrity guest in the fifth season of the animated comedy “Rick and Morty.” In addition, she has voiced Planetina in the adult animated science fiction sitcom “Rick and Morty” in 2021, as well as Am in the anime “Star Wars: Visions.” Brie will play Ally in the upcoming comedy “Somebody I Used to Know,” as well as acting in the film “Spin Me Round.”

Alison Brie is a married woman. On March 13, 2017, she married Dave Franco, an American actor, voice actor, and director. Brie started dating Dave in 2012 after meeting him at a New Orleans Mardi Gras party in 2011. The two were rumored to be engaged on August 25, 2015.

Here we are providing the list of favorites of Alison Brie: Some Interesting Facts About Alison Brie