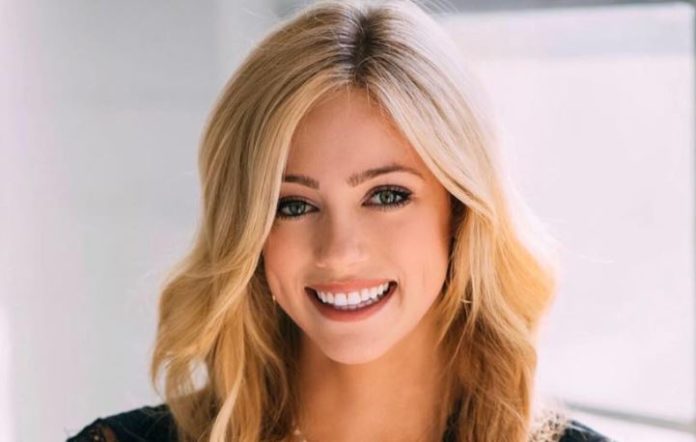 Being a gorgeous daughter of a sports personality will surely get attention from around the world. Abby Hornacek is the daughter of former NBA Player Jeff Hornacekwho got fame overnight because of her smile and beauty. She moved into sports journalism just after completing her graduation and also did coverage for the NBA summer league in 2016.

Born on 25th April 1994 in Paradise Valley, Arizona, United States of America, and will become 28 years old. She has a great height of 1.73 meters and a curvy figure which is 34-26-35 which makes her so gorgeous. Her weight measures 60 kilograms. She has green eyes and blonde hair.

She is receiving a salary of $56k per year by doing professional anchoring. According to some sources her net worth is estimated to be around $500k however actual amount will be different from this.

She went to Xavier College Preparatory in Phoenix. As a sports enthusiast, In her first three years she played volleyball for the school team and won the Class 5A Division I state title. Later, she joined the University of Southern California and completed her graduation in May 2016 with a degree in Broadcast Journalism.

Talking about her family she is the daughter of Jeff Hornacek and Stacy Hornacek. Her father was a well-known former NBA player and a coach, who joined as the head coach of the New York Knicks of the National Basketball Association (NBA). She also has two elder brothers whose name is Tyler and Ryan.

In January 2014, Abby Hornacek started her journalism career when she attended Fox Sports San Diego as a production intern. She was also promoted from production intern to feature reporter where she coveredPhenix Suns while her father was a coach at that time.

She became a famous personality while working as a travel and lifestyle host at Fox Nation. Being a famous fox news anchor she got so many followers on social media and all want to know about her personal life. Till now, She hosts three shows, American Arenas, PARK’D, and Ride to Work.

In PARK’d, she explores National Parks by traveling across the country and showcasing each one’s history while also participating in a few adrenaline activities at every place. While in American Arenas, she visits the iconic sports areas across America. In Ride to Work, she pulls in other talents to work inside the Fox network.

Talking about her relationships, Abby doesn’t reveal much information about her love life on social media. She kept her love life private and has always managed to keep that aspect of her life away from the limelight. Some Interesting Facts About Abby Hornacek